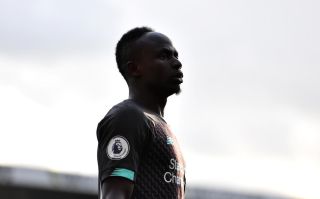 Liverpool manager Jurgen Klopp played down striker Sadio Mane’s angry display after being substituted in the 3-0 win at Burnley.

The Senegal international, who scored his fourth goal in as many games, become annoyed after apparently failing to receive a pass from Mohamed Salah late on.

He was taken off shortly afterwards and proceeded to show a side to his character rarely seen in the mild-mannered forward.

However, Klopp laughed it off.

“But it’s good eh? He was upset, it was obvious,” said the German.

“Sadio cannot hide his emotions, I like that. But all sorted. We spoke about it and everything is fine.

“We are individuals, we are emotional. It was a situation in a game. What else could have happened? It was not a phone call.

“Would he do exactly the same again? Probably not. He didn’t say any wrong words, he just looked a little bit different to how he looks usually.”

Mane’s goal gave the visitors a cushion after a fortuitous opener when Trent Alexander-Arnold’s cross deflected up off Chris Wood and looped into the top corner.

Roberto Firmino became the first Brazilian to reach 50 Premier League goals before the focus turned to Mane when the pair were taken off five minutes from time.

The win extended their 100 per cent record to four matches, maintained their two-point lead over Manchester City and set a new club record for 13 consecutive league victories.

Not that Klopp was that excited.

“I don’t feel proud in the moment but I am happy because this record is really nice,” he added.

“We don’t go for these records but this team want to write their own stories and create their own history.

“The 13th game in that series, with the boys showing that attitude, that makes it.

The boss on our win, the Reds' record and the reaction to the overall performance 👊 #BURLIV— Liverpool FC (@LFC) August 31, 2019

“If someone had asked me four weeks ago if it was possible I would have said, ‘probably not’ so now we have to pray they come back (from internationals) healthy and the most intense period starts in September with five away games and one home game.

Burnley, by contrast, have not win since the opening day of the season but manager Sean Dyche believes his team is performing better than results show.

And he singled out defenders Ben Mee and James Tarkowski, questioning why they had not been called up by Gareth Southgate this week.

“I am surprised they are not getting a look-in around the England camp,” he said.

“Maybe they are on the verge, I don’t know, but I was surprised they didn’t get among it. Who knows, another time maybe?”

Dyche added: “I have got to be honest, I was pretty pleased with the performance overall. I don’t think it ends up a 3-0 game on the actual game.

“The first one is unlucky, the second one is a mistake and until then I didn’t think there was a lot in it.

“They are clinical, no taking away from them today. We held our own in so many ways but the details are so important in every game, especially against the top sides.”