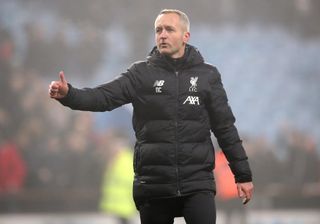 Liverpool Under-23s coach Neil Critchley insists Jurgen Klopp’s presence is always felt by the younger players – even if he will not be at the FA Cup fourth-round replay at home to Shrewsbury.

The Reds boss has been criticised for observing the mid-season Premier League break by sending his players away on holiday and taking a break himself, meaning he will miss the tie at Anfield on Tuesday.

Many critics felt Klopp should be there on the night but his stand-in does believe it makes a difference.

“He gives myself, the staff and players unbelievable support so I can speak to him whenever I like when I’m down here,” said Critchley, who took charge of a youthful team for December’s Carabao Cup quarter-final defeat at Aston Villa when the first team were at the Club World Cup in Qatar.

“He supports the young players unbelievably well, as he has shown so far this season so his presence, even if he isn’t there, is always felt by our younger players and by myself.

“I also think maybe one per cent that came into his thinking with his decision was the way we played against Aston Villa, he maybe thought the boys deserved another opportunity.”

Critchley will field many of the side which were beaten 5-0 by Villa, even though they put in a decent performance considering the circumstances.

Shrewsbury Town secure a dream trip to Anfield in the #EmiratesFACup thanks to an incredible second-half comeback! pic.twitter.com/yuYLO7od9E— The Emirates FA Cup (@EmiratesFACup) January 26, 2020

He does not believe that experience will impact them second time around against the Sky Bet League One side.

“You can’t buy experiences like that, it is probably worth a million of my coaching sessions,” he added.

“I thought it was a little bit harsh on us, but we have to take lessons from that. We didn’t do well enough in both penalty boxes and if you are going into a results-driven business you have to win games of football.

“We didn’t keep the ball at one end and didn’t score at the other end and that’s not a recipe for success, so our aim is to do a lot better than that tomorrow night.”

Key to any success at Anfield will be how those players who have already had some first-team exposure perform.

Toxteth-born teenager Curtis Jones has been one of the best players in their two FA Cup ties so far, scoring in both, while midfielder Pedro Chirivella has performed consistently well while 16-year-old Harvey Elliott showed flashes of his talent in the third-round tie at home to Everton.

However, Jones, who could become Liverpool’s youngest captain if he gets the nod ahead of Chirivella, will be key.

“Self-belief is probably not one of his weaknesses, but that is also why he is who he is,” said Critchley.

“It’s ridiculous when you’re talking about experience and Curtis has only just turned 19 and we’re going to have players who are eligible for the under-18s team.

Since Klopp made the decision to withdraw first-team involvement no-one has given Liverpool’s youthful side a mention in terms of potential progression.

Asked whether they had been written off Critchley added: “Have we? Not us, not inwardly. We’re talking about how we can do well and the things that we’re going to need to do well to give ourselves an opportunity of being in the game.

“Is there maybe more pressure now on Shrewsbury to win the game because of the team that we have out? Possibly. But that might work in our favour.”