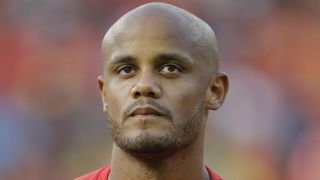 Vincent Kompany is determined to recover from a groin injury in time to play for Belgium at the World Cup in Russia, where his aim is to become a champion.

The 32-year-old defender sustained the injury in Belgium's friendly against Portugal on Saturday, which ended goalless, adding to the list of fitness problems he endured throughout the 2017-18 season at Manchester City.

Kompany managed just 17 appearances as City won the Premier League but he told Belgian broadcaster RTBF that he is not worried about being fit enough to play in Russia.

"I am confident it will be okay," he said. "I feel good and have often fought back.

"The goal to play at the World Cup is in my head and I try to achieve that.

"The past few days I have not followed what the media have written, but you will see. I have the habit of returning after injuries, that is my plan now."

Belgium face Panama in their Group G opener, before taking on Tunisia and then England, and Kompany said he is hoping he and his team-mates can go all the way.

"I continue to prepare for the World Cup with the same attitude," he said.

"Even though I may not be the most realistic, I am going to Russia to become world champion.

"My suitcases are ready."