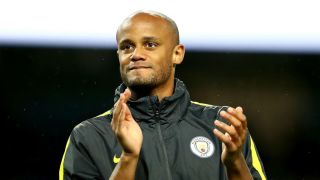 Vincent Kompany's return to form and fitness with Manchester City has seen him earn an international recall for Belgium's matches with Czech Republic and Estonia.

Kompany has not featured for his country since October 2015 after struggling with a series of muscle injuries.

The 31-year-old enjoyed a run of seven successive matches for City since April as Pep Guardiola's men secured third place in the Premier League, and qualification for the Champions League group stage.

His displays have done enough to impress Belgium boss Roberto Martinez and he will hope to feature in the friendly with Czech Republic before their World Cup qualifier with Estonia.

Kompany is joined in the squad by team-mate Kevin De Bruyne, the pair two of 15 Premier League players named by Martinez.