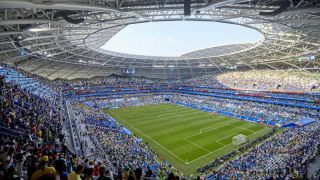 Samara's World Cup journey is over, but what legacy will the finals leave behind? The city's Russian Premier League club, Krylya Sovetov, or 'Wings of the Soviets', stand to be the primary beneficiaries.

England's quarter-final win over Sweden on Saturday was the last of the six Russia 2018 fixtures at Samara Arena, situated a 30-minute drive from the centre and built to look like a huge UFO, in keeping with the region's ties to the aerospace industry.

Also known as the Cosmos Arena and constructed specifically for the tournament, the venue is soulless to look at from the outside, surrounded by vast, open expanses of concrete and ominous perimeter fencing.

But inside, the 45,000-capacity arena is visually striking, with its multi-coloured seating and broken eggshell design atop the stands – a far cry from Krylya's Metallurg Stadium.

Based in the Bezimyanka district, or 'no-name place', Krylya's current home is a throwback to the Soviet-era stadia of the 1960s and 70s.

With only three sides and no roof, it offers a sharp contrast to its modern counterpart but played host to Krylya's successful 2017-18 campaign, which saw the club return to the Russian Premier League at the first time of asking.

And Krylya, who played a couple of matches at Samara Arena at the end of last season, are set to enjoy their renewed status as a top-flight club amid plush new surroundings on a more permanent basis as they prepare to move into the stadium, provided they come to a financial agreement with the state, which owns the venue.

Took a tour of the area surrounding Krylya Sovetov’s stadium - the stardust hasn’t quite reached this part of Samara.Weren’t allowed in the ground for reasons which remain vague, but did manage to get hold of some Krylya merchandise29 June 2018

"We are expecting the final answer [soon]," Krylya sporting director and deputy CEO Zurab Tsiklauri told Omnisport. "I hope that there won't be any problems for the club.

"However, I did hear that for some time the government will be in charge of everything, but after some time the stadium is supposed to go under club ownership. That's what I've heard and that's what we are expecting.

"On July 30, we have a [season-opening] game with CSKA Moscow scheduled here at the new Samara stadium. As far as I am concerned, after the end of the World Cup we're supposed to move into the new stadium and start playing there."

Unlike the major hubs of Moscow and St Petersburg, Samara has not had the feel of a city gripped by World Cup fever.

After the final in the capital on July 15, the FIFA Fan Fest at Kuybyshev Square will be packed up, the roads surrounding it will be re-opened and you get the impression the residents will continue as normal, despite the best intentions of the organising committee.

"Right now, we are trying to figure out ways of using all this experience we've got and to apply it in the future of the city," Aleksander Fetisov, head of that board and vice governor of the Samara region, told Omnisport.

"For example, we've talked with the Brazil representatives and have decided to organise a Brazilian carnival here in the city at the beginning of July as a tradition. They are going to help us and take part in this new tradition.

"We are enriched with the new experiences and traditions that foreign guests have brought to our city. Samara before and after the World Cup will be two completely different cities."

It remains to be seen if those words ring true and the World Cup does leave a lasting city-wide legacy but, for Krylya at least, the changes could be seismic.

Spoke today to Krylya Sovetov’s CEO about the in Samara, star players for and the club’s plans to move into the new stadium here in the city 4 July 2018

"Until recently, we had been playing in the old stadium that was built in the 60s and, to be honest, it doesn't fit any standards that it's supposed to anymore," says Tsiklauri.

"Therefore, it's such an amazing thing that we have this new modern stadium built in Samara and I think this stadium will be an extra motivation for increasing the amount of spectators coming to watch the Premier League games of our club.

"If the team play well and the club show good football, we would easily see 25 to 30 thousand people in the stands.

"So, we'll do our best to make our fans happy, even though it's not that easy to do, when you see the best national teams in the world playing here. But we will do our best!"