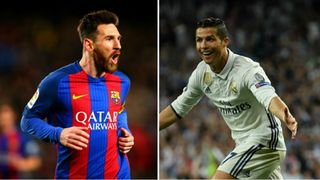 For the first time since 2012, it was Ronaldo's Madrid that lifted the league title as the Portuguese scored in a 2-0 win at Malaga to leave Zinedine Zidane with a LaLiga winners' medal after his first full season as head coach, while Los Blancos also have a Champions League final on the horizon.

But it was Messi that came out on top individually as he took home the coveted "Pichichi" award for finishing as the league's top scorer - the fourth time he has done so compared to Ronaldo's three, although the Argentina star made five more league appearances.

Using Opta stats, we take a look at how Messi and Ronaldo compared in terms of goals this season.