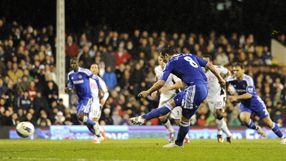 The 33-year-old Lampard struck from the penalty spot in the 45th minute after Salomon Kalou was brought down in dubious circumstances in the box.

Fulham equalised with seven minutes to go when Clint Dempsey headed his 16th league goal of the season from a right-wing corner.

Chelsea remained sixth in the table, two points behind Tottenham Hotspur and Newcastle United who are level on 59 points with five games to go in the race for the fourth and final Champions League qualifying berth for next season.

"This was a big missed opportunity for us," said England international Lampard. "We saw the Spurs result - we knew we could close the gap and we wanted to win the game.

"My achievement doesn't feel too good right now because this feels like a defeat. We feel we had a big hold of the game and we let it slip.

"Personal landmarks are great and will be especially good when I look back at the end of my career but it is a shame that today's goal didn't get us a win. I can't enjoy it when it doesn't get us three points."