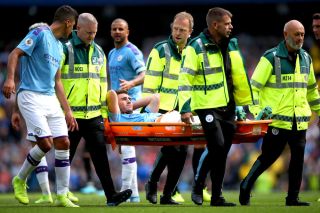 Manchester City fear Aymeric Laporte could face a lengthy lay-off after suffering a serious-looking knee injury in the champions’ 4-0 victory over Brighton.

The Frenchman was carried off on a stretcher after going down in agony following a challenge on Adam Webster late in the first half of the Premier League clash at the Etihad Stadium.

City have already lost one player in winger Leroy Sane to a long-term knee problem this season and the club are anxious Laporte has not suffered the same fate.

“He didn’t feel good. The doctor is going to call me and tell me what he has but I think, for a while, he will be out. Hopefully it is not as long as Leroy but we will see.”