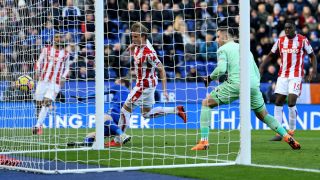 Jack Butland scored a disastrous own goal as Leicester City came from behind to claim a 1-1 draw at home to Stoke City in the Premier League on Saturday.

Stoke were on track to move out of the relegation zone thanks to a fine first-half strike from Xherdan Shaqiri, who scored his fourth goal from outside the box this season.

But Butland misjudged a powerful cross from Marc Albrighton, deflecting the ball into his own goal to extend Stoke's four-month wait for an away league victory.

Leicester winger Riyad Mahrez started for the first time in the league since the closure of the transfer window, but he was kept quiet by Stoke's left-back, Premier League debutant Konstantinos Stafylidis.

Shaqiri gave Stoke the lead shortly before half-time, scoring for the third straight Premier League match with a fine arrowed strike from 25 yards after Leicester gave the ball away.

Claude Puel's men did not look as though they would find an equaliser with Butland mostly untested in the Stoke goal, before his horrendous error cost Paul Lambert's men a vital three points, with Harry Maguire and Matty James almost winning it for Leicester, their efforts both thudding against the woodwork.

7 - Since the start of last season, Stoke have scored seven own-goals in the Premier League, more than any other side. Clanger. February 24, 2018

James smashed an early chance over the crossbar as Leicester started brightly.

Kasper Schmeichel made a comfortable save down to his left to keep out Badou Ndiaye's drive, with a mishit Mahrez effort similarly easy fare for Butland after 25 minutes.

Mahrez should have done better when a long ball from Demarai Gray saw Leicester break, but the Algeria international curled a trademark 25-yarder wide of the far post with his left foot.

Leicester had lost the ball away in their own half on multiple occasions and they were punished for a lapse three minutes before the break.

3 - Xherdan Shaqiri has scored in three consecutive games in Europe's big five leagues for the first time ever. Trio.February 24, 2018

Joe Allen hustled Wilfred Ndidi out of possession on the touchline and when he shifted the ball inside to Shaqiri, the Swiss star burst into space in front of the Leicester defence and bent a wicked strike into Schmeichel's bottom-left corner.

Leicester, who were unbeaten in five games against Stoke, made a high-tempo start to the second half, but the visitors almost doubled their lead after 55 minutes.

Emboldened by Stoke's fine display, Lambert threw on teenage striker Tyrese Campbell - son of former Everton forward Kevin - for his Premier League debut, with Puel turning to attacking pair Kelechi Iheanacho and Fousseni Diabate to spark life into his side.

4326 - Tyrese Campbell made his Premier League debut 4326 days after his father Kevin Campbell last made an appearance in the competition (April 2006 v Newcastle). Generation.February 24, 2018

But it was Albrighton who provided the equaliser for Leicester after 70 minutes, bursting down the right wing and thumping a cross straight at Butland, the England goalkeeper somehow managing to direct the ball straight into his own goal.

Butland made a fine save from Mahrez to somewhat make amends, and was on hand seconds later to push Maguire's thunderous drive against the post as Leicester threatened to snatch all three points.

After substitute Charlie Adam's awful header sent Mahrez through, Butland made another vital save to protect Stoke's point after Kurt Zouma's block deflected the winger's effort, with James heading against the post in a frantic finale.