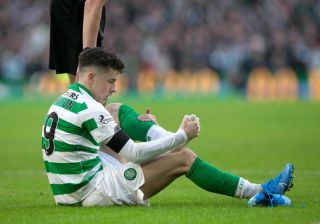 The Scottish champions are still assessing the winger’s injury after he went off against St Johnstone on Wednesday night.

“It looks like he has twisted the knee and there is a bit of swelling there and ligament damage.”

Lennon was visibly frustrated after the substitute went off during Celtic’s 3-0 victory in Perth.

The Celtic manager made his third change in between Johnston suffering the injury and coming off after the 20-year-old tried to play on.

“It might have compounded the problem,” he said. “It was annoying for me because we were making a substitution and he said he was alright to carry on.

“But quite clearly after a couple of minutes that wasn’t the case. We had already made the substitution. So it was a learning experience.”

Despite the fresh injury blow, Lennon remains relaxed about his transfer business ahead of Friday’s deadline having signed midfielder Ismaila Soro and striker Patryk Kilmala this month.

Another winger, Mohamed Elyounoussi, will miss Sunday’s visit to Hamilton but the on-loan Southampton player is getting back into training following a foot problem.

“We are looking at options but we are not guaranteeing anything,” Lennon said. “If we can do some business, great, if we can’t do some business then great because I am really pleased with the squad of players I have got.

“We have a good squad, decent depth, and once we get a few injuries back we will be fine.

“Sometimes in the last couple of days something crops up so you have to wait and be patient. I might be sitting Friday night late on and something might happen. We are not in a panic to do anything.”

Lennon’s use of a 3-5-2 formation in recent games, and the performance of wing-back Greg Taylor in Perth, might also reduce any need to recruit a new winger.

“I was delighted with his (Taylor) performance. It’s not a tried and trusted system that we are going to use all the time. We will just look at the personnel and see what we think the best fit is.”

Lennon dismissed reports Olivier Ntcham and Craig Gordon might depart this month when he spoke after the win in Perth, and he confirmed that Gillingham had failed in a bid to sign Karamoko Dembele on loan.

“They made an enquiry about it and it was turned down,” Lennon said.

“I think this is the best place for him. We know of his capabilities, we know of his talent. We are very excited about him but he is just going to turn 17 soon.

“We have to protect him and we have a duty of care with him in terms of his development but we want it here.”

Luca Connell could go on loan with Barnsley and Sunderland reported to be interested in the 18-year-old, who is yet to make a first-team appearance since joining Celtic from Bolton.

“It might be good for him to get out and get some game time,” Lennon said. “He had a thigh injury which kept him out for a couple of months and now he is playing very well in the development team.”