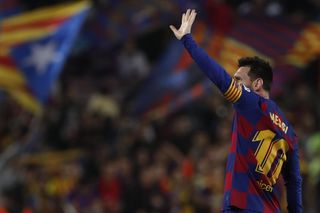 Lionel Messi’s brace helped fire Barcelona back to the top of LaLiga as Real Valladolid were thrashed 5-1 at Camp Nou.

Messi struck in either half, his second with a landmark 50th career free-kick, while defender Clement Lenglet, Arturo Vidal and Luis Suarez were also on target.

Kiko Olivas had hauled Valladolid level in the first half after Lenglet’s early opener, but it was one-way traffic from there as Barca leapfrogged Granada back to the summit with a seventh straight win in all competitions.

Barca, without a game at the weekend following the postponement of El Clasico for security reasons, made a flying start.

France centre-half Lenglet lashed home into the top corner following a corner in the second minute.

Messi went close to extending his side’s lead when his low shot was brilliantly saved in the bottom corner by Valladolid goalkeeper Jordi Masip before Valladolid hauled themselves level.

Barca goalkeeper Marc-Andre Ter Stegen was unable to gather Michel’s excellent free-kick from the left and Olivas forced the ball home with his knee.

Vidal headed off target from close range soon after as Barca looked to regain the lead, but made amends just before the half-hour mark as he raced on to Messi’s sublime throughball and despatched a low finish beyond Masip’s reach.

The Argentinian curled a sublime left-footed free-kick into the top corner for his fourth goal in as many matches to give his side a two-goal cushion.

Messi was denied his second by another superb low save from Masip just before the interval.

Barca teenager Ansu Fati, handed his second league start for the club, and Lenglet went close to extending their side’s lead early in the second period.

Messi provided a trademark finish for his second with 15 minutes left after running on to Ivan Rakitic’s throughball and two minutes later provided the assist for Suarez to add Barca’s fifth.

Suarez was thwarted by Masip after being set up by Gerard Pique in the closing stages and Messi spurned a chance for his hat-trick when pulling his shot just wide in stoppage time.