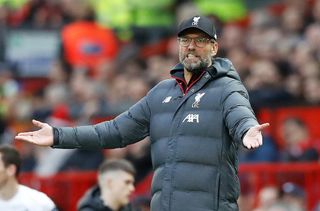 Liverpool’s bid to end their 30-year wait for the title this season may now seem ‘inevitable’ to many, but manager Jurgen Klopp insists he had never heard of the word let alone understood its meaning.

Another late victory, this time 2-1 over Wolves on Thursday, restored the Reds’ 16-point advantage at the top of the Premier League, making it 22 wins from 23 matches and meaning just nine more are needed to guarantee a long-awaited championship trophy.

From being the ‘Unbearables’ last season after winning the Champions League for a sixth time, Klopp’s side are now being referred to as the ‘Inevitables’ in some quarters.

However, the German easily sidestepped the discussion on Friday as he continued to play down any title talk.

“I have been four and a half years in this country and I never heard that word before, I have no clue what they talk about. What is inevitable?” Klopp said.

When the meaning was explained to him, he added: “Ah, it’s going to happen? We couldn’t care less.

“As far as I’m concerned we are not even mathematically qualified for the Champions League yet.

“The only thing we can do is focus on the next game. That is Shrewsbury, then West Ham, then Southampton, then we have a week off and we start again.

“That’s the plan. I don’t know another plan. Whatever you say about us, if it’s positive then thank you very much, and if it’s negative, I don’t care.

“I cannot change the situation; I never heard that anything is decided before it’s decided so why should we think about these things?

“The game last night was a very good example for our situation. It was never easy and it never will be easy.”

Sunday’s trip to mid-tabled League One side Shrewsbury in the FA Cup fourth round is also likely to provide a test.

Klopp will rest the majority of his first-team regulars, as he did in the last round against Everton.

Sadio Mane would not have played in the match any way but the extent of a hamstring injury he suffered at Wolves is still being assessed.

Klopp, however, could welcome back one of his three injured midfielders, Naby Keita, for the first time in a month for the trip to Shropshire.

“I think in this moment he is having a scan. They didn’t call me out of the scan,” said Klopp on Mane.

“For Shaq (Xherdan Shaqiri) and Milly (James Milner) it’s too early. Naby we will have to see.

“My information is that he will be part of training today. Then we have to see how he looks.

“The boys who didn’t play yesterday will be training intensely today, a very important session.

“We will see if he can be part of that completely, if so then he will be an option.”