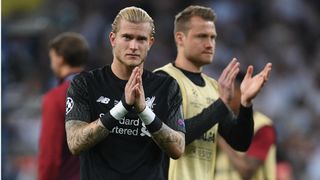 Simon Mignolet has branded Liverpool's decision to loan Loris Karius to Besiktas as "bizarre", as the Belgium international claimed he is still unsure over his future at Anfield.

Karius, who has been replaced as Liverpool's number one by Alisson Becker, completed a two-year loan switch to Turkish Super Lig side Besiktas on Saturday.

Mignolet spent much of last season playing second fiddle to the former Mainz goalkeeper, and has now seemingly criticised Liverpool's decision to allow Karius to leave, insisting that he also had offers to move away.

"The transfer of Karius doesn't change anything for me, I have always been clear: I want to play," Mignolet told Het Laatste Nieuws.

"I find it bizarre that Karius was loaned while I also had options to be loaned. But for some reason that was not possible.

"A goalkeeper who was preferred to me last year may leave on a loan basis. Strange."

3 - Loris Karius made more errors leading to goals in his final four appearances for Liverpool (3) than he did in his previous 45 games for the club (2). Misfortune. 24 August 2018

Mignolet returned to Liverpool's squad on Saturday, taking his place on the bench as Jurgen Klopp's side ran out 1-0 winners over Brighton to move to the top of the Premier League.

"Being number two or number three makes little difference. Playing minutes is the most important thing," he added.

"Nobody has said anything to me after the departure of Loris. So I don't know what my future at Liverpool is. We will see what happens this week."