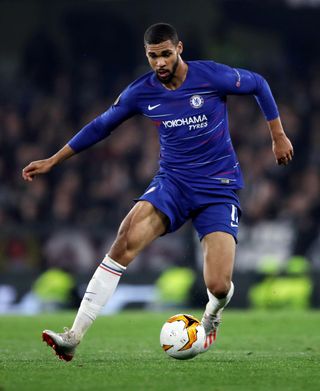 Ruben Loftus-Cheek has revealed his “confusion” at the prospect of facing as long as a year sidelined after Achilles surgery.

The Chelsea midfielder ruptured his Achilles in Chelsea’s 3-0 charity friendly win at New England Revolution in Boston on Wednesday.

The 23-year-old had only just started to get the better of long-term back spasms, and will now miss out on England’s Nations Cup campaign this summer.

Loftus-Cheek will miss Chelsea’s Europa League final clash with Arsenal in Baku on May 29 and the start of next term, but pledged to come back stronger after successful surgery.

“My surgery went very well yesterday evening so I’m off to a good start!

“I’ll be watching and supporting from the sidelines for a little while so I wish the boys all the luck in the Europa League final and of course the Nations League finals.

“Coming back strong from an injury is something I’ve had to do all my life and I’ll do it again.”

Chelsea confirmed in a statement that Loftus-Cheek’s surgery had proved a success.

The Blues took on Major League Soccer outfit New England as part of the club’s high-profile campaign against anti-Semitism.

Callum Hudson-Odoi suffered a torn Achilles in Chelsea’s 2-2 Premier League draw with Burnley on April 22, and will also miss the start of next term.

“He will miss the UEFA Europa League final and England’s campaign at the Nations League finals and will spend the summer undergoing rehabilitation in order to resume full training as soon as possible.”