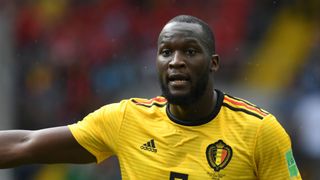 Romelu Lukaku is unlikely to be risked in Belgium's concluding World Cup Group G game against England in Kaliningrad.

The Manchester United striker has been in superb form so far in Russia, scoring a brace in each of the wins over Panama and Tunisia.

But Lukaku sustained external ligament damage to his left ankle in the latter 5-2 victory and, although head coach Roberto Martinez reported good news overall on his number nine's progress, he seems set to sit out on Thursday with qualification for the knockout stages already secured.

"With Romelu Lukaku we had very good news on the scan. He had no further damage but it is still uncomfortable," Martinez told his pre-match news conference on the eve of the game.

"We'll will make a final assessment tonight for him to be involved or not.

"At the moment he is still in the recovery phase and had a really difficult knock against Tunisia.

"We are happy that tomorrow is probably one day too early, but I don't think he is going to take any longer than that."

7 - Romelu Lukaku has now scored more goals in World Cups and European Championships than any other Belgium player in history. Finisher. June 23, 2018

Martinez has already floated the idea of wholesale changes against England, in a game where he claims victory is not a "priority" for his side.

Lukaku lies joint second alongside Cristiano Ronaldo in the race for the World Cup Golden Boot, one shy of England captain Harry Kane, who has five.