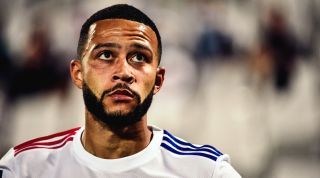 French newspaper L'Equipe have reported that Lyon have halved the asking price on their talismanic attacking midfielder Memphis Depay, in a bid to find him a new club.

Depay joined the French side for around £16m following an underwhelming stint at Manchester United. This fee is thought to have risen to £22m over the years following clauses, with the Dutchman having originally chose to sign for OL with help from computer modelling by data intelligence company SciSports.

Lyon have been looking to recoup that £22m with Depay's sale, but with the transfer window set to slam shut next week and no takers for the Netherlands international, they've slashed that asking price in half to try and move the player on.

Depay signed a four-and-a-half-year deal with Lyon back in January 2017. He is still on that original contract, which is set to end next summer.

REPORTS Arsenal set to move for alternatives, with their No.1 target now looking less likely

Barcelona were thought to be interested in Depay at one stage with Ronald Koeman keen on bringing his compatriot to the Nou Camp. Lyon president Jean-Michel Aulas has since denied that Barça will be entertaining a bid for his player though, despite looking to tie up Sergino Dest from Ajax in the coming days.

“No, I spoke with President Bartomeu twice on the phone, who I know well,” Aulas confirmed lately. “Barto is a friend, who said to me that they absolutely don’t have the funds.”

There are a number of Premier League sides who could be interested in signing Depay in the coming days - especially for such a cheap fee. United have a buy-back clause on their former player, though they seem unlikely to view him as a worthy Plan B to Jadon Sancho.

Wolverhampton Wanderers have recently sold Diogo Jota and would relish the opportunity of bringing in another attacker, Leeds United would be a fascinating fit and Leicester City could do with a little more depth. Crystal Palace are said to be eyeing up Said Benrahma to bolster their frontline, too.

IN-DEPTH Will Liverpool equal Manchester United's Premier League record this season? What life is like back on the perch

Whether Depay would consider a step down to any of these sides is another issue. Lyon are out of Europe this season following Ligue 1's decision to cancel the domestic season following COVID-19 and Depay would ideally like to move to a side who could offer him Champions League football.

Lyon are hoping to come to an agreement over the sale of Houssem Aouar to Arsenal in the final few days of the transfer window, too.