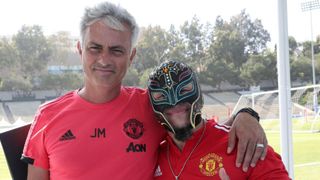 Manchester United were visited by wrestling royalty during a pre-season training session in Los Angeles on Thursday.

Mexican great Rey Mysterio turned up at United's UCLA base to greet manager Jose Mourinho and his players.

The 43-year-old posed for photographs, got a personalised Red Devils jersey and even gifted goalkeeper David de Gea a special version of his famous mask, produced in the club's colours.

De Gea and new signing Fred had earlier arrived at the training camp for the first time following their extended post-World Cup breaks.

The squad were stoked to have wrestling superstar watch training today!  July 27, 2018

Having flown out to the United States, De Gea took part in goalkeeping drills while Fred worked away from the main group, who were recovering from the penalty shoot-out win over AC Milan in the International Champions Cup.

The Brazil midfielder is still recovering from the effects of the ankle injury he suffered while in Russia, where his side reached the quarter-final stage.