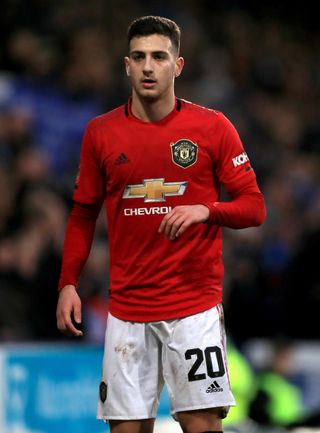 Diogo Dalot revealed scoring his first Manchester United goal in the 6-0 rout of Tranmere felt like “a release” after a frustrating time with injuries this season.

Hip and groin problems have limited the Portuguese’s opportunities this term but he started for the first time since October in the FA Cup fourth-round tie on a boggy Prenton Park pitch.

After Harry Maguire had also opened his account for the Red Devils, Dalot also got on the scoresheet, turning masterfully past his marker and firing across Tranmere goalkeeper Scott Davies and into the net.

Jesse Lingard, Phil Jones and Anthony Martial struck before half-time and Mason Greenwood then completed the scoring with a second-half penalty as United eased into the next round, to the delight of Dalot.

“(The goal) was more like a release of something I’d been feeling inside me after these three months,” Dalot told MUTV.

“It’s been a tough journey but these kinds of things, the win and the goal, make us feel I’m doing a good job in fighting and working every day and taking the opportunities.

“I’m very happy. I’ve been working very hard for the opportunity and I needed to give my best. The most important thing was to help the team. We did a great job, great result and we get to the next stage.”

Dalot hailed the professionalism of United, who travel to Manchester City on Wednesday in the second leg of their Carabao Cup semi-final, needing to overturn a 3-1 deficit.

United then welcome Wolves to Old Trafford before a two-week winter break.

“If we didn’t come with the right mentality or right desire to win, I think it could have been difficult for us, but we did a good job – right mentality, proper fight, respect the opponent and we got the win,” the 20-year-old full-back added.

“Now we need to keep working because we have two difficult games before the winter break.”

Now that their cup run has come to an end, Tranmere’s focus will be on preserving their place in League One, where they sit third bottom and three points adrift of safety, albeit with games in hand on their rivals.

Manager Micky Mellon insists there has been no difference in how his players have approached fixtures in the league and cup, saying: “I don’t think we’ve tried any less in the league.