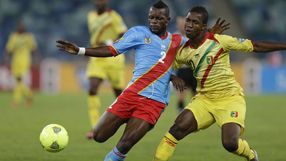 The draw ensured second place behind Ghana in Group B. Mali will stay in Durban to take on South Africa on Saturday.

Mali overcame the early scare to dominate the game and restrict the chances of a Congolese side, who had to win to usurp their opponents for a place in the last eight.

The penalty was conceded inside a minute when Momo Sissoko brought down Yves Diba, allowing Dieumerci Mbokani to score his second from the spot at the tournament.

The foul came after a shot from Lomana Lua Lua had bounced back off the post in a dramatic start to the match at a wet Moses Mabhida Stadium.

Sissoko almost redeemed himself in the fifth minute with a volleyed shot that was saved by Congo goalkeeper Robert Kidiaba.

It marked a quick change in the control of the game that saw Mali wrestle dominance in a strong display of midfield force.

A strong run from fullback Adama Tamboura set up the 14th minute equaliser as he pulled the ball back for Mahamadou Samassa to tap the ball home.

With Ghana already leading in the other group match, Mali were satisfied to hold onto the point needed to qualify and restrict the Congolese to limited chances, in a stop-start match punctuated by 51 fouls through the 90 minutes.

"It was emotionally difficult knowing what was happening in the other game and knowing we needed just a point. We need to keep up our intensity," said Mali coach Patrice Calderon.

Samassa might have had second goal in the 69th minute when Kidiaba spilled his shot but the ball trickled away for a corner.

With eight minutes left Mali then twice hit the outside of the woodwork as they expertly kept the play in Congo's half.

There was an attempt at a late surge for the Congolese but no clear chances for them to force the winner they needed, much to the disappointment of a large contingent of their supporters.

Mali finished with four points to three for Congo. Niger finished bottom of the group with one point.