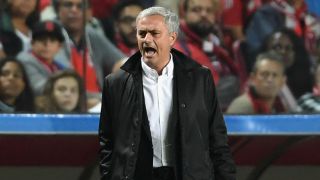 The defensive style used at Anfield did not go down well with football purists as United nullified Liverpool's attacking threat, while Mourinho's men failed to impress in their 1-0 win over Benfica in the Champions League on Wednesday.

Bellamy believes United and the club's fans will only tolerate Mourinho's approach for a certain period in their pursuit of a first Premier League title since 2012-13.

"Going from winning [the league] on a regular basis, to now coming off it has got them in that much of a panic.

"Bobby Charlton said it through the years that Mourinho isn't a Man United type of manager. At the moment, for their desperation to win trophies, to get back to the top, they will bring him in and they will let it go for now, but there will only be a period Manchester United supporters and Manchester United as a football club will allow this to happen for.

"Manchester United is a huge club, with a huge tradition, and you don't want to be going too far away from that."