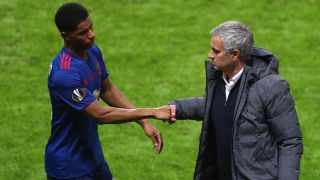 Gareth Southgate hailed Marcus Rashford's progress in the latter part of this season after calling him up to the senior England squad, a decision that sees Manchester United manager Jose Mourinho get his way.

After Rashford's inclusion in the 25-man selection to face Scotland in World Cup qualifying and the friendly against France, Southgate confirmed the 19-year-old will not travel to the Under-21 European Championship in Poland next month.

Mourinho has regularly spoken out against his striker participating in that event, with the England boss' climbdown coming after he had previously advocated him playing for the Under-21s to gain tournament experience.

But Southgate insists circumstances have changed since then given Rashford's improvement for United towards the end of 2016-17 – which closed with United winning the Europa League – and, after the two England games, Mourinho will see the teenager get a period of rest and recuperation before he reports back for the start of pre-season.

"He is in the senior squad on merit and has been for a year," Southgate told the Football Association website.

"He had one game with the Under-21s when I was there in September and he was outstanding that day, but he has not really been a part of the Under-21 squad.

"His performances warrant him being in the senior squad. The question then is: could he have gone with the Under-21s after that? In my opinion, no.

"He is a 19-year-old player who has had an exceptional season and by then will have had virtually 60 matches by that point. Somebody has to protect him. Somebody has to manage the development of a young player, and that has to be my call."

Southgate added: "That is not easy, because I'm very conscious that the development teams and their success is a very important part of what we want to do. We still want to fulfil that, and that is why we have got the likes of James Ward-Prowse and Nathan Redmond going back with the Under-21s now.

"In my view, Marcus' situation is different. He has played fewer games in this Under-21 campaign than Eric Dier and Dele Alli – we are not sending those guys, and we won't be sending Marcus.

"In January, that [sending him to the U-21 Euros] was probably where I was heading with it. He wasn't a regular in Manchester United's team and he hadn't done quite as well for us in November.

"In March, it was important that he was with the senior squad as we didn't have Harry Kane, Daniel Sturridge or Daniel Welbeck. His impact on our games and the way he trained with us was very impressive.

"He then went back to Manchester United and was in their team right the way through to the end of the season, playing in big high-pressure matches. His mentality has been excellent and his performances have been very, very good. It would be inconceivable not to put him in the senior squad."