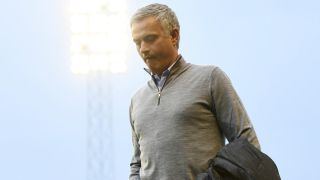 Jose Mourinho says he is very pleased with Manchester United's performance against Celta Vigo, but does not feel the same way about the result and believes the Europa League tie should already be over.

That came after the visitors had seen Sergio produce a stunning save from Rashford, while also denying Henrikh Mkhitaryan and Jesse Lingard in huge scoring opportunities for the visitors prior to the break.

Although United hold the advantage going into next Thursday's second leg at Old Trafford, Mourinho feels the tie could have been over had his side taken their chances.

"I am very pleased with the performance but not with the result," the United manager told reporters after the match.

"We played well enough to have [the] result closed but we have to go and play at Old Trafford.

"At half-time [it] should have been three or at least two, but the result is open."

Mourinho continued: "We tried to win the match. We missed chances but the team played well, they were compact against a team who are difficult to play against.