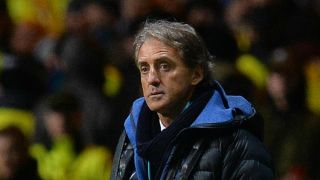 Roberto Mancini does not think Zenit should be considered contenders to win the Europa League, despite eliminating Celtic to reach the last 16.

Callum McGregor's goal earned the Scottish champions a 1-0 lead to take to Russia, but Zenit roared back with a highly impressive 3-0 victory.

Branislav Ivanovic scored an early header to mark his 34th birthday with his third goal in the competition this season and bring Zenit level in the tie.

Zenit won the tournament in the 2007-08 season but Mancini believes inexperience in his squad will stop them going all the way again.

"I don't feel that we can win because there are many strong teams and we are a young team," the Italian told BT Sport.

"We played better than Celtic. I think we played a good game in Glasgow, but it was the first game after the winter break.

"The games were different for this reason. We were so tired after 70 minutes, but that is normal."

Everyone at FC Zenit would like to say a huge thank you to the amazing supporters for creating such a special atmosphere tonight February 22, 2018

Defeat in Russia means Celtic have failed to reach the last 16 of a European tournament since the 2012-13 Champions League, leaving Brendan Rodgers frustrated with his side's showing.

"It was probably that inconsistency over the course of our European campaign that's probably disappointed most," Rodgers told BT Sport.

"Last week we showed when our concentration is at its best, we defend forward and we can defend well.

"But tonight I thought in the first half in particular we weren't aggressive enough and a bit passive.