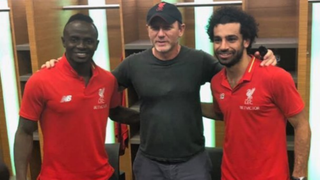 Liverpool had to contend with a spy lurking in their dressing room after Thursday's 2-1 International Champions Cup (ICC) win over Manchester City, as James Bond made a special appearance.

Actor Daniel Craig, a known Liverpool fan, was present at the MetLife stadium in New Jersey and posed for photos with Reds players following their victory.

James Milner, Alberto Moreno, Sadio Mane and Mohamed Salah were particularly eager to meet Craig, who has played Bond in four films and is due to start working on a fifth this year.

Craig's appearance came after Salah and Mane left City shaken – but not stirred – in a strong performance, with both players getting on the scoresheet.

Although the first half passed without much fanfare, Leroy Sane gave City the lead to scare the living daylights out of Craig and the rest of the Liverpool faithful.

But Salah – making his first Reds appearance since the Champions League final – levelled soon after and Mane wrapped up a deserved win late on from the penalty spot.