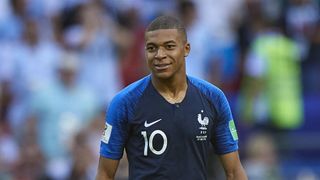 Mbappe was in sensational form as France came from behind to beat Argentina 4-3 in the last 16 at Russia 2018, becoming the first teenager to score more than once in a World Cup match since Pele in 1958.

The Paris Saint-Germain forward showed incredible speed as he drew a foul from Marcos Rojo to earn a penalty that Antoine Griezmann converted, before his double put Les Bleus out of sight in Kazan.

Maradona sees shades of his former Boca Juniors team-mate Caniggia, a World Cup runner-up with Argentina in 1990 and a Copa America champion the following year, in Mbappe.

"Argentina went out to attack France and made the mistake of leaving a lot of room for Mbappe, who is like Caniggia in his early days," he told teleSUR.

"[Rojo] let him enter the area and then knocked him down. That's not what a national team player should do.

"He had to go straight to the body and knock him down before Mbappe moved the ball forward."

Maradona highlighted Argentina's difficulties in attack, with Lionel Messi deployed as a false nine between Angel Di Maria and Cristian Pavon against France.

"We do not know how to attack, we do not know what to do when we have the ball. France are different: they have a counter-attack, variation, they have options on the right and the left," he said.

"I saw Messi very isolated, away from the box. I said if he played as a nine he had to go looking for the ball, link the play, set goals up and score them.

"Then we are talking more about Patoruzu [an Argentine comic character that possesses superhuman physical strength] than Messi."