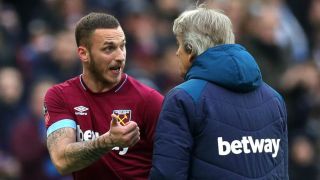 Manuel Pellegrini is keen to draw a line under Marko Arnautovic's future after the forward signed a new West Ham contract.

Arnautovic's agent and brother had told the media that the Austria international, linked with a lucrative move to the Chinese Super League, wanted to leave London Stadium.

But, after days of speculation, Arnautovic committed his future to West Ham by signing fresh terms with the club on Saturday.

News of Arnautovic's contract was announced after West Ham were knocked out of the FA Cup at AFC Wimbledon.

Pellegrini, though, said the situation with Arnautovic should not be blamed for the Hammers losing 4-2 to the League One side.

"I said you can have a lot of excuses and one of those excuses is that transfer speculation can cause a lot of damage in some clubs. A lot of things affect the players, but I don't want to talk about excuses.

"I am happy for us that Marko has finished his issue and he will stay here and I hope he will be the player we know he can be in the next game.

"I expect from every player, not only Marko, to see their performance as high as you know that player can give you. That is the most important thing for me. Players must play to eight out of 10 in every game.

"Everyone knows what Marko can do. He made an important difference in the second half of last season and I hope he can do so again this season."

Asked if Arnautovic will stay at West Ham for the 2019-20 campaign, Pellegrini added: "We can talk about that at the end of the season."

West Ham have been linked with a move for Celta Vigo striker Maxi Gomez but Pellegrini was unwilling to open up on the speculation.

"There have been 35 or 36 players that have come here and I will say the same thing, nothing on rumours," he said.

"About new players? No. We are talking about injured players and we have them coming back and they will help us in some positions.

"We have Ryan Fredericks back and Manuel Lanzini can be available in three weeks or one month more and he is a very important player."