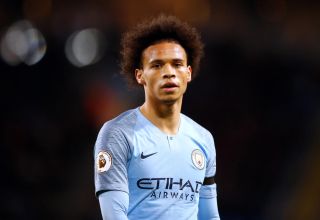 Sane is contracted to the domestic treble winners for the next two seasons, but Bayern are eager to lure the 23-year-old back to Germany.

The Bavarian giants are on the lookout for wingers following the departures of Arjen Robben and Franck Ribery, and there have been declarations of interest in Sane from both president Uli Hoeness and chairman Karl-Heinz Rummenigge.

Sane scored 16 goals in 47 appearances in all competitions this season but has struggled to command a regular starting spot in the last few months.

He was reduced to late cameos in both the finals of the Carabao Cup and FA Cup, while he started only three of City’s final 11 fixtures.

City are thought to be keen to convince Sane – who joined from Schalke for £37million three years ago – to remain in Manchester, but Matthaus believes a return to his homeland is more likely.

“A player who, in my eyes, will enchant the Bayern fans next year is Leroy Sane,” Matthaus wrote in his column for Sky Sport.

“I am sure he will move to Munich. If Uli Hoeness publicly reveals that he makes a bid for a player, in the vast majority of cases they arrive at Bayern.

“And it would be a fantastic transfer, as Sane is one of the best wingers out there. Tricky, dangerous in front of goal, fast, comfortable on both wings and with a great future.

“Guardiola is not really satisfied with him, the player wants to play more regularly and Bayern are looking for at least one wide man after the departure of Robben and Ribery. It would be a win-win transfer for all parties.”

As for the transfer fee involved, Matthaus speculated that it could be a record-breaking sum for Bayern.

“Quality always has its price and Sane is more expensive than the previous record transfer of 80million euros for Lucas Hernandez.

“He may not be quite as expensive as Neymar, but it’s likely to be 100m. Salary, bonus payments and transfer fees together, it would become a new record in Bayern’s history. But the player is worth it.”