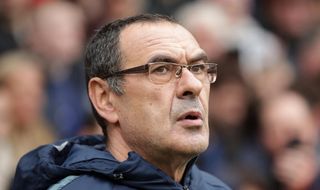 Maurizio Sarri has left Chelsea and signed a three-year deal to become manager of Juventus, both clubs have confirmed.

Chelsea announced on Thursday that they had agreed a compensation fee, understood to be in excess of £5million, for the 60-year-old, who told the club he wanted to return to Italy in order to be closer to his family.

“The two clubs have reached an agreement for the early termination of Sarri’s contract with Chelsea FC which had two years left to run and is ending at his request,” Chelsea said on their official website.

Chelsea director Marina Granovskaia added: “In talks we had following the Europa League final, Maurizio made it clear how strongly he desired to return to his native country, explaining that his reasons for wanting to return to work in Italy were significant.

“He also believed it important to be nearer his family, and for the well-being of his elderly parents he felt he needed to live closer to them at this point.”

Chelsea added: “We would also like to congratulate him on securing the role as big as any in Serie A and to wish him the best of luck for the future.”

Juventus confirmed Sarri has signed a three-year contract and welcomed the former Napoli boss on their official website.

“Maurizio Sarri has returned to Italy, where he has coached for the majority of his career. And from today, he will take over the reins at Juventus with a contract until June 30, 2022,” the Serie A champions said.

Sarri only arrived at Stamford Bridge last summer as a replacement for fellow Italian Antonio Conte after spending three years at Napoli.

He guided Chelsea to a third-placed finish in the Premier League and won the Europa League. The Blues also reached the Carabao Cup final, losing out to Manchester City.

But Sarri still endured a tough campaign at the London club as fans were not convinced by his style of play, while he sometimes appeared to be at odds with his players.

The Carabao Cup final was overshadowed by goalkeeper Kepa Arrizabalaga’s refusal to be substituted before the penalty shoot-out.

Sarri will now attempt to build on the legacy of Juventus, who parted company with manager Massimiliano Allegri this summer after being crowned Serie A champions for the eighth season in a row.

Former Blues midfielder Frank Lampard, who led Derby to the Championship play-off final in his first season as a manager, is favourite to land the role.

Should he get the job, the 40-year-old would become Chelsea’s first permanent English manager in 23 years.