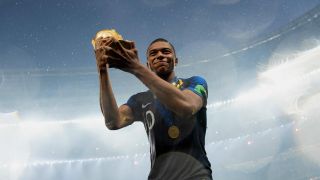 France defender Raphael Varane has described Kylian Mbappe as "a young alien" after the Paris Saint-Germain forward helped to inspire Les Bleus to glory at the World Cup.

Mbappe won the FIFA Young Player award for his performances in Russia, where he scored four goals, including one in France's 4-2 victory over Croatia in the final.

When asked about the experience of playing alongside Mbappe, Real Madrid defender Varane – who faced the 19-year-old in the Champions League last season – joked that the prodigious attacker was from another world.

"I have known some aliens," Varane told L'Equipe. "I think this is the first time I have met a young alien.

"Normally I meet extraterrestrials when they are 25, 30 years old. At the World Cup, I met one under the age of 20.

"With him, everything goes faster. When I talk tactically with him before the matches, I do not have time to finish my sentences before he has already understood and assimilated what I'm saying."

As well as giving him the chance to marvel at Mbappe, the World Cup allowed Varane the opportunity to make his own mark on football's most famous competition.

The 25-year-old said his performances in the finals helped him to shake off criticism that has dogged him during his hugely successful career, namely suggestions he is "too nice".

"You cannot have the career I'm having, staying at Real Madrid for seven years, without character.

"I have my style of play; it has not done too badly until now. People have wanted me to change and it annoys me.

"Do we ask Ramos to be someone else? We take him as he is; take me as I am. I'm proud that, at this World Cup, I have – in quotation marks – 'accepted myself as I am'."