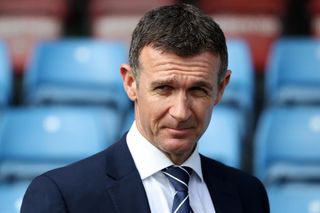 Jim McIntyre insists he “absolutely” expects to be Dundee manager next season – even if his side lose their fight for Ladbrokes Premiership survival.

The Dens Park outfit’s US-based owners raised eyebrows this week when they released a near 1,400-word statement but failed to mention their under-fire boss.

In the lengthy script posted on the club’s website, chairman Tim Keyes and managing director John Nelms reassured fans they remained committed to the club while going on to discuss plans for a new stadium, season-ticket prices and even a club beer festival.

But there was no vote of confidence for McIntyre, who has found himself in the firing line from fans as his side teeters over the Premiership trap door.

Anything but a win when Hamilton visit Dens on Saturday will see McIntyre’s men relegated, but the manager says he does not feel under pressure from the board room.

Asked if he expects to be in charge next term, the former Ross County boss said: “Absolutely, of course I do.

“I don’t need any reassurances. John and I talk nearly every day. We’ve got a brilliant relationship. He knows exactly what I want to do and where I want to go.

“Equally, I know where he wants to take the club also.

“That’s an on-going process so I don’t need any reassurances from John or the powers that be at the club.

“I’ve had total backing since the day I walked in the door.

“John and Tim have been first class. It was a really difficult transfer window but they backed everything I wanted to do.

“They backed me by putting in a new £25,000 gym so that the players had a proper working environment.

“So since I came to the club, there has been nothing but backing.

“I think the statement put out was done so to quell rumours of them pulling out. What they spoke about was to let the Dundee fans know that they are going nowhere, so I was quite happy with the statement.”

Dundee’s survival hopes were dealt a fresh blow last week as they lost an injury-time winner to Motherwell.

That 4-3 Fir Park loss, combined with last-gasp equalisers for both their relegation rivals St Mirren and Accies, dumped another dose of misery on a team that has now lost nine games in a row.

But McIntyre says there is no time for his side to feel sorry for themselves as he urged the players to give themselves a fighting chance of staying up by winning their final three games.

He said: “We have got to give our punters something to get off their seats and show a real determination to get the points.

“The fans have been right behind us all season but have been let down on too many occasions. We know how sore the results have been.

“But what they will see this weekend against Hamilton is no lack of effort endeavour. We just have to be better in the key moments of the game.”