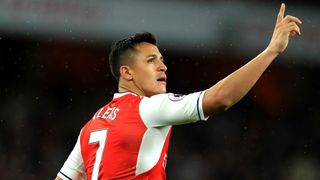 Per Mertesacker says everybody at Arsenal wants Alexis Sanchez to stay because of his "X-factor".

Chile forward Sanchez, whose contract at the Emirates Stadium expires at the end of the coming season, has been heavily linked with a move away.

Manchester City and Paris Saint-Germain have been reported as holding an interest in the former Barcelona man, who has been open in his desire to play Champions League football after Arsenal missed out on the top four last campaign.

But captain Mertesacker, speaking after Arsenal's 5-2 Emirates Cup win over Benfica told reporters: "I think everyone wants him to stay because he's a player with the X-factor and in the last season he has played some incredible games and he was our dominant goalscorer."

However, Mertesacker insisted the attention in pre-season has not been on Sanchez, but rather their two new signings, defender Sead Kolasinac and France striker Alexandre Lacazette.

"But still, we're not focusing as much on that because it's another season and we have new signings as well and we're trying to focus on them," he added.