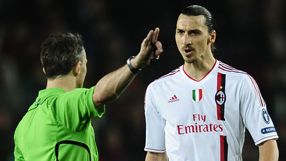 The three-times World Player of the Year netted a penalty after 11 minutes, scored with a second spot-kick just before the break and then helped to set up Barca's third goal for Andres Iniesta as they ran out 3-1 winners at the Nou Camp.

The Argentine passed the previous competition record of 12 goals set by himself last season and Dutchman Ruud van Nistelrooy with Manchester United in 2003.

It also made him the youngest player at 24 to pass the 50-goal mark in Europe's elite club competition as he moved on to 51.

While the debate rages around him as to whether he should be considered one of the greatest, if not the greatest, player of all time, Messi continues to notch up goals at a dizzying rate.

With two months of the season left to play, he has already amassed 58 goals in all competitions.

In stark contrast, his former team-mate at Barcelona, Milan striker Zlatan Ibrahimovic, who had been touted as the main threat to Barca's progress on Tuesday, was left ranting about the referee.

The Milan players were fuming over Dutch referee Bjorn Kuipers decision to penalise Alessandro Nesta for pulling Sergio Busquets's shirt at a corner for the second penalty.

"Barca don't need these things. They are the best team in the world," Swede Ibrahimovic, who left the club under a cloud in 2010, was quoted as saying in the Spanish media.

"I start to understand Jose Mourinho when he talks about what happens when you come here to play against them. Now I have seen it first hand and I understand it more and more."

Real Madrid coach Mourinho has accused Barca of getting preferential treatment from match officials in Europe.

Barca coach Pep Guardiola dismissed the idea there was any doubt over either penalty when asked about Ibrahimovic's comments.

"I have seen replays of both incidents and they were clear penalties," Guardiola said.

"Ibrahimovic wants to make friends with Mourinho, but it is now five times in a row we have made the semi-finals. We do our talking on the pitch."