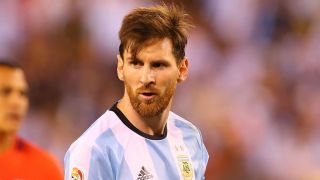 Lionel Messi's lawyer said his team "felt satisfied" after presenting an appeal against his four-match ban for Argentina to FIFA.

Messi was handed the suspension by FIFA after abusing a match official during the 1-0 victory over Chile last month, ruling him out of the 2-0 loss at Bolivia and their next three 2018 World Cup qualifiers.

Argentina are fifth in CONMEBOL qualifying, which would see them have to contest an inter-confederation play-off, two points ahead of sixth-placed Ecuador.

Should the ban hold up Argentina - who are set to offer the coach's job to Sevilla boss Jorge Sampaoli after sacking Edgardo Bauza - will be without Messi for qualifiers with Uruguay, Venezuela and Peru, though he would be in line to return for a potentially crucial final game away against Ecuador.

"I think we did a very good job," Messi's attorney Juan de Dios Crespo told ESPN FC Radio in Argentina after the hearing in Zurich. "FIFA has asked us not to comment a lot on the subject. Once they announce their decision I will speak more.

"They must study the case now. It is possible that next week FIFA will announce a decision.

"Our optimism is based upon a job well done. I can't discuss the case right now. In a few days I will be able to give you all the details. But now I cannot tell you whether or not there was videoconferencing [with Messi from Barcelona]."

Pressed on whether Argentina would take an appeal to the Court of Arbitration for Sport, De Dios Crespo replied: "Let's wait to see what happens. We have asked that the ban be lifted. We are hopeful it will be completely reduced. We shall see."