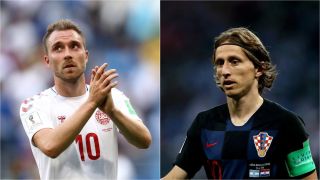 Denmark boss Age Hareide is eagerly anticipating a battle between Christian Eriksen and Luka Modric when his side face Croatia on Sunday.

Group D winners Croatia return to Nizhny Novgorod, the scene of their stunning 3-0 win over Argentina, to take on the Group C runners-up in what looks likely to be a balanced encounter.

Modric scored a fine goal in that defeat of Argentina and has arguably been the standout performer of the World Cup so far.

But Hareide thinks he could have met his match when he comes up against Eriksen, who was in good form against Peru and Australia before enduring a more frustrating game against France, when Denmark played to secure a draw.

"Christian has had a wonderful qualifying campaign and here he has one assist and one goal," Hareide told a news conference. "He has the capacity to do more.

"It could be a match between Eriksen and Modric in midfield – that would be interesting, for the fans as well. We'd be seeing two quality players. That would be great."

3 - Croatia have won three consecutive World Cup games for the first time in their history. Outsiders.June 26, 2018

Hareide thinks it would be futile to put a specific plan in pace for Modric, though, given the quality Croatia boast throughout their squad.

"There's Modric, [Ivan] Rakitic, [Mario] Mandzukic,[Ivan]  Perisic, so many skilful players," he said. "Modric is a wonderful player and plays at a great club, and he's been very prominent for Croatia, we know that. We need to see what we can do collectively to deal with him."

Denmark have reached this phase of the World Cup in four of their last five appearances at the finals, although 1998 was the last time they reached the quarter-final stage.

Hareide is not thinking about the prospect of taking his side into relatively uncharted territory, though, insisting they cannot look beyond Sunday's match.

"I think we're writing Danish history, anyway," he said. "But I'm not thinking much about that. I'm thinking about our team being able to play in different ways.

"The Australia match was a bit out of control because there was a penalty against us; against France, we started with a deep defence, which we haven't done before, we've always pressed high up the pitch. We knew all thee group games would be different and difficult to what we've played before.

"Croatia are very good at variety, pressing high, low, defending and attacking. They have very good passing skills but also some long balls and that surprised Nigeria and Argentina. They're very flexible because they have good strikers who can read the situation well. These will be two teams who will test each other offensively. It'll be a good match."