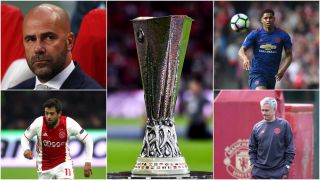 Manchester United manager Jose Mourinho will be hoping to maintain his 100 per cent record against Ajax when they meet in the Europa League final on Wednesday.

Two of the continent's most iconic clubs will battle for silverware in Stockholm's Friends Arena, with Ajax looking to end a 21-year European trophy drought and United hoping to clinch the only piece of silverware still evading their clutches.

Mourinho rested his first team for the final day of the Premier League season on Sunday and can take confidence from having won all six of his previous matches against the Dutch giants.

However, Ajax triumphed 2-1 at Old Trafford in the most recent meeting between the sides in the 2011-12 Europa League last 32.

Here, we take a look at the best Opta stats ahead of the final in Sweden.

- Ajax are in their first European final since their penalty shoot-out defeat to Juventus during the 1995-96 Champions League campaign.

- Ajax and United have met four times before in European competition, sharing two wins apiece. There were wins for either side in the 1976-77 UEFA Cup first-round tie and again in the round of 32 during the 2011-12 Europa League campaign, though United progressed on both occasions.

- Marcus Rashford has been directly involved in each of United's last four goals in the Europa League (two goals and two assists). Hakim Ziyech has recorded four assists in his last three appearances in the competition for Ajax.

hero?Marcus Rashford has been directly involved in 6 goals in 10 European games for Manchester United this season. May 22, 2017

- Jose Mourinho has won all six meetings with Ajax as a coach; those victories all came in the Champions League during his time at Real Madrid.

- Only Patrick Kluivert and Ton Blanker (both seven) have scored more goals than Kasper Dolberg (six) as a teenager for Ajax in European competition.

- No player has recorded more shots on target this season in this competition than Bertrand Traore (16); only Zenit's Giuliano (14) has been directly involved in more goals this term than Traore (8 – four goals and four assists).

- This game will be the 56th official game for Ajax this season, a new club record for the Amsterdam side.

- Amin Younes (73) has completed more dribbles in the Europa League this season than the next two best players combined (Paul Pogba, 37 and Bertrand Traore, 31).

DID YOU KNOW?Amin Younes has been directly involved in 7 goals in this competition for Ajax this season. May 22, 2017