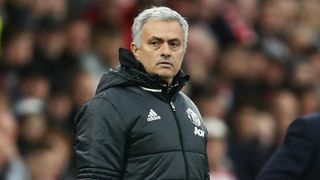 Jose Mourinho insists he is in no rush to sign a contract extension as the Manchester United boss is content to serve out his three-year deal before entering negotiations.

Reports have linked the former Real Madrid boss with extending his stay at Old Trafford following the club's flying start to the campaign, but the 54-year-old distanced himself from such speculation.

Having guided United to the EFL Cup and Europa League title last season, the 2017-18 campaign has started with three Premier League wins on the bounce, but that does not mean Mourinho is eyeing a more long-term commitment.

"I don't think about it," he told The Times when quizzed on the prospect of penning fresh terms. "I don't need a new contract to work to my limits.

"In the past I always wanted to coach in different places. When I came to Chelsea in 2004 I never thought to stay for 20 years. Never.

"When I went to Italy I always had in mind I had to go to Spain. If in this moment now you ask me can I go to France or to Germany, I say, 'Why not? Why not?'.

"But I'm in a different moment in my career now. I always had Spain and Italy [as places where he hoped to manage], but England is my passion and at this moment I can say I would like to stay many years."

United return to top-flight action with a trip to Stoke City on Saturday before kicking off the Champions League group stage with the visit of Basel.