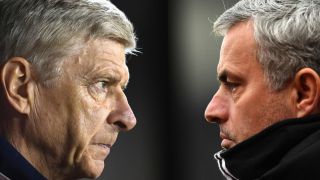 Manchester United boss Jose Mourinho says there are no problems between him and Arsene Wenger anymore and claimed the Frenchman will be "really happy" with him for fielding a weakened team at Arsenal on Sunday.

One of the Premier League's longest-running feuds, stretching back to Mourinho's time at Chelsea, has thawed in recent months with Wenger telling a news conference on Thursday he was "open to peace" between the two.

Mourinho, who has labelled Wenger "a voyeur" and a "specialist in failure" in the past, was equally happy to let bygones be bygones when asked about their relationship ahead of United's trip to the Emirates at the weekend.

He told reporters: ""He doesn't need to [make peace] because there are no problems.

"At the last match at Old Trafford we shook hands before and after. I remember that I met him in the corner of the room for the press conferences and we shook hands again.

"When there is peace I don't have any problems. I am a big boy, I've been in football all my life. I know that [when there are] problems on the pitch, the next day is not a problem anymore. So for me, no problem at all."

Mourinho is set to make a raft of changes to his starting XI for the game as he prioritises success in the Europa League, a tournament that also grants a place in next season's Champions League for the winners.

He added of Wenger: "I think he will be very pleased with me that I am going to be changing my team to play against Arsenal, he will be really happy with me."