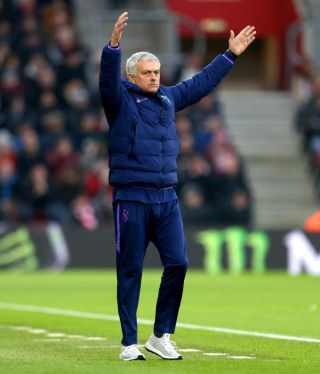 The Spurs boss felt a number of decisions went against the hosts and insisted Raheem Sterling should have been sent off for an early foul on Dele Alli.

There was also penalty controversy before Oleksandr Zinchenko did see red for City, with Tottenham taking advantage as debutant Steven Bergwijn opened the scoring and Son Heung-min wrapped up a 2-0 victory.

But while Mourinho, who would have enjoyed getting one over his old adversary Pep Guardiola to move Spurs up to fifth in the Premier League in the process, refused to criticise Dean he was clearly unhappy with the VAR contributions throughout the game.

“I love football and I thought I was going to love VAR, that was my initial feeling,” he said.

“So one more reason to give the right decision, but the game started immediately with the wrong decision. It’s a red card, it’s a direct red card to Sterling.

“I know that Mike Dean has a difficult job. He’s on the pitch and it’s 200 miles an hour. I wouldn’t like to be a referee because it’s so difficult.

“Sometimes I try in training sessions and I realise that it’s too difficult. So for me Mike Dean, good performance. The problem is the VAR.”

Mourinho also suggested Alli may have suffered an injury following the foul from Sterling but was full of praise for debutant Bergwijn, who struck a fine effort to break the deadlock.

“It was a debut goal that was the icing on the cake of a very good performance,” he said of Bergwijn, who joined from PSV Eindhoven on Wednesday.

“Independent of the goal I would say his performance was very good, very solid. Very mature. We worked hard during the week.”

Meanwhile, City boss Guardiola nodded when asked if Liverpool, now 22 points clear at the top of the table, will go on to lift the trophy but appeared to aim a thinly-veiled swipe at former Premier League chief executive Richard Scudamore.

Speaking in 2018, Scudamore spoke about wanting clubs to get closer to City, who had just lifted the Premier League trophy having amassed 100 points – now Guardiola feels those who wanted challengers for his side should also fear Liverpool’s dominance this season.

“They are far away, they are unstoppable and a lot of points (clear),” he said.

“Of course now it is to target other competitions and qualify for the Champions League next season.

“Two seasons ago when we had 100 points we finished 19 points clear of United and in that period Liverpool were strong.

“The team is good and I like the way my team play but it is not enough, we are far away and the distance is so big and it is the reality.

“So now it is Liverpool you have to be concerned about (if you are) the owner of the Premier League.”