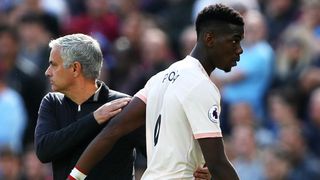 Jose Mourinho was the problem at Manchester United as he wanted to be the centre of attention, according to Paul Pogba's brother Mathias.

Mourinho was sacked by United last month, amid reports of dressing-room unrest having fallen out with star midfielder Paul Pogba in Manchester.

The World Cup winner – who was stripped of the vice-captaincy earlier in the season and dropped to the bench during Mourinho's final few weeks in charge – has flourished since the Portuguese's departure, scoring four goals and tallying three assists under caretaker boss Ole Gunnar Solskjaer in the Premier League.

And Mathias Pogba pointed the finger at Mourinho when explaining his brother's revival at Old Trafford.

Mathias Pogba added: "From what we see of Mourinho, he always wants to be the maestro – the centre of attention

"Paul, he does not even calculate that aspect, you respect him, he will respect you, you trust him, he will perform for you in big matches."

World Cup winner Paul Pogba has scored seven Premier League goals and nine in all competitions for United, who are fifth ahead of their blockbuster trip to Tottenham on Sunday.