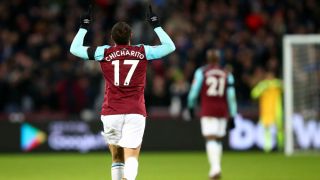 West Ham manager David Moyes has looked to end speculation over Javier Hernandez's future, insisting he has no interest in losing players from a squad he is looking to bolster in January.

The Mexico striker's first league goal from October rescued a point on Saturday as the Hammers drew 1-1 with Bournemouth.

Hernandez cancelled out Ryan Fraser's goal, striking immediately after kicking off, but neither side could find a winner at London Stadium.

And Moyes, who believes his side played some of the best football during his time at the club so far on Saturday, was quick to laud the former Manchester United man.

"As far as I'm concerned you can look at my bench today and say 'if there’s one club that doesn't need to lose any players it is West Ham', because of the numbers - we're so short.

"Actually, if there's one place we are actually quite big is the centre forwards, we have four or five but suddenly we've got injuries to some of them and because of that then we’re really short.

"We could do with a body or two coming in, so we'll try to do that. We're working on it and we'll try to get the right players.

"At periods in the first half we played some of the best football of my time here, but we lacked a clinical edge, so we needed Chicharito.

"I think the sort of goal he got today might be typical, so we need to try and get a lot more balls in the box and hopefully he's going to score a lot more for us in the coming weeks and months.

"We know that's what he does – he's the sort of centre forward who has made a living out of being a fox in the box and scoring at every opportunity they get."

Bournemouth manager Eddie Howe, meanwhile, was left to rue his side's loss of concentration that allowed West Ham to draw level so soon after they had taken the lead.

"We grew into the game, I thought we were slow out the traps but it wasn't a great start from us and we did well not to concede," Howe told the club's website.

"It's frustration as we'd done so well up the other end, then the nature of their goal was hugely disappointing, we didn't attack the ball well enough."