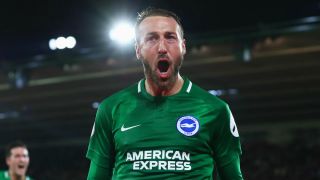 Glenn Murray has extended his contract with Brighton and Hove Albion until the end of the 2019-20 season.

The striker, who has scored six times in the Premier League this season, would have seen his previous deal expire next year.

"We are delighted to have extended Glenn's contract. He has proved a vital member of the team and his goals have been crucial to us," said Brighton manager Chris Hughton, via the club's official website.

"Glenn has scored consistently for us, first in helping us win promotion, and now in the Premier League as we seek to establish ourselves at the top level.

"He's proved himself at the very top late in his career, and his professionalism and approach on and off the pitch is a big factor in why he's still doing it now."

Murray scored his 100th Brighton goal to secure a 1-0 win over Wolves at the end of last month.