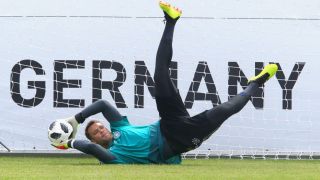 Manuel Neuer will make his long-awaited return from injury in a friendly against Austria as he seeks to prove his fitness ahead of the World Cup, Germany's goalkeeping coach Andreas Kopke has confirmed.

Bayern Munich star Neuer has not played competitively since September due to a broken foot, although he has been included in Joachim Low's provisional squad for Germany's defence of the World Cup in Russia.

The 32-year-old, who captains both his club and country and was a key member of Die Mannschaft's successful campaign in Brazil in 2014, has returned to full training in recent weeks.

Speaking during a news conference at the team's pre-tournament training camp, Kopke confirmed Neuer will be involved in some capacity when Germany play a warm-up game against their neighbours in Klagenfurt.

"As things stand, Manuel Neuer will play on Saturday," he said.

"Those are the games that he needs right now."

Asked if Neuer will start or come on as a substitute, Kopke replied: "As usual, the line-ups will be determined on the go.

"There's still time to look and prepare and see what exactly…the players [are capable of].

"There were exchanges throughout the training between Manuel and the coaching staff to see how he's coming on.

"The foot seems to be in a good spot and there was continuous contact, back and forth, to ensure everything is fine.

"If there was a problem he would come forward."

Should Neuer fail to convince Low and his staff he is ready to start the Group F opener against Mexico on June 17, Barcelona's Marc-Andre ter Stegen is poised to play between the posts.

"The coaching staff has discussed how Ter Stegen fits in," Kopke said.

"As it's essentially consistent through the German line-ups [how the team plays], every player is able to step in.

"You can't take away from what Neuer has done as the captain, leading the team on and off the field. But whoever starts will have the utmost confidence of the players and coaching staff.

"Ter Stegen's last season has been terrific for Barcelona. There are four goalkeepers for the squad currently in case things don't go the way the coaching staff would like but we have full confidence going forward.

"From a Ter Stegen point of view, he has been terrific for Barcelona, he has garnered tremendous respect from the players. The players feel very comfortable with whoever is in goal. It won't affect anything."