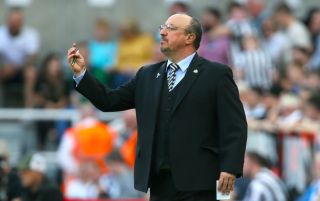 Newcastle boss Rafael Benitez will renew acquaintances with Aleksandar Mitrovic on Sunday insisting there are no hard feelings.

The Serbia international was sold to Fulham, much to the dismay of many Magpies fans, in a £27million deal last summer as Benitez looked for another type of striker and eventually landed Salomon Rondon on loan.

The Spaniard will send his players out at Craven Cottage with his side safe in the Premier League and their hosts heading back to the Sky Bet Championship after the briefest of stays, but wishing his former player well.

He said: “I’ve said so many times my relationship with Mitro is much better than maybe people think. I am a professional and I had to analyse whether, in my opinion, we needed him.

“But I’m really pleased he’s done well there and is scoring goals – although hopefully not this weekend. He’s a good player and he suits the style they play there.

“He loves football, he’s very competitive, I think he’s a good player. He will score goals for sure.”

Misgivings over Mitrovic’s departure only increased when he scored four times in his new club’s first four games in a season where he finished with 11 league goals, one more than Rondon.

However, Rondon’s mobility and work ethic have proved better suited to the way Benitez wants his team to play.

The 59-year-old said: “It’s just we were looking for something different for us. Different players suit different tactics and Salomon Rondon has done really well for us. As a team, we needed to be solid and we needed to get results all together and we did it.”

Benitez will go head to head with Scott Parker on Sunday after the former Newcastle midfielder was handed the Fulham reins on a permanent basis after overseeing three wins in the club’s last four games.

“He’s had a long time in English football, so he knows the team, he knows the players – I think he’s the right man.”