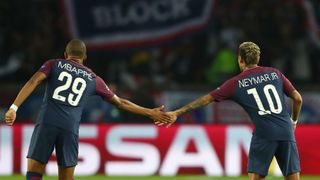 Neymar believes Paris Saint-Germain prodigy Kylian Mbappe ought to be a contender for the Ballon d'Or.

The Brazil star left Barcelona to join PSG for a world-record €222million - a switch reportedly fuelled by Neymar's desire to escape Lionel Messi's shadow in his pursuit of football's ultimate individual honour.

Neymar has made a stunning start to life in France, scoring six goals and assisting as many more in just seven appearances.

Mbappe has scored just twice since his loan move from Ligue 1 champions Monaco, but his strike against Bayern Munich in Wednesday's 3-0 Champions League thrashing evidenced the 18-year-old's appetite for the big occasion.

And Neymar believes his teenage team-mate has mental and technical attributes way beyond his tender years.

"Mbappe, I have the impression that he is already 30 years old," Neymar told reporters. "He is so mature and so complete.

"He's a player who will be a pain for the defenders and he'll be in the race for the Ballon d'Or."

Cristiano Ronaldo is widely regarded as the favourite to win the Ballon d'Or in 2017, having guided Real Madrid to double LaLiga and Champions league glory last season.