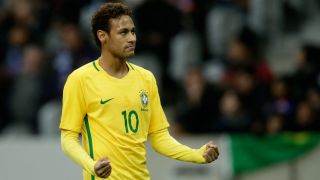 Paris Saint-Germain and Brazil star Neymar has made his much-anticipated return to action from a foot injury.

The 26-year-old came on as a second-half substitute for Brazil in Sunday's friendly clash with Croatia at Anfield.

Head coach Tite had promised to play the forward for part of the match to help him regain some rhythm ahead of the World Cup.

It is the first time Neymar has appeared since suffering a fractured metatarsal and sprained ankle in the Ligue 1 match against Marseille on February 25.

The former Barcelona man, who joined PSG for €222million last August, had an operation to repair the damage before recovering in Brazil.

He returned to France early last month to continue his rehabilitation work at PSG's training facilities.

Neymar is expected to get more playing time in next Sunday's friendly versus Austria, before Brazil begin their World Cup campaign against Switzerland on June 17.