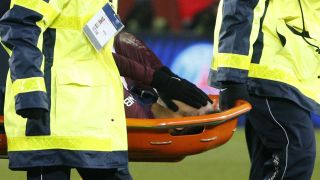 Neymar is a major doubt for Paris Saint-Germain's last-16 Champions League second leg against Real Madrid after the Brazilian suffered a fractured foot.

Reports initially indicated Neymar may have sustained a broken ankle during a 3-0 Ligue 1 win over rivals Marseille on Sunday, the 26-year-old leaving the field in tears as he was carried off on a stretcher.

Neymar landed awkwardly following a challenge with Marseille's Bouna Sarr, appearing to roll his right ankle as he planted his foot.

Unai Emery indicated after the match he was optimistic Neymar would recover from what the coach described as a twisted ankle in time to face Madrid on March 6.

But PSG released a statement late on Monday suggesting the Brazilian's ankle injury, combined with a cracked metatarsal, will give him little chance of taking on Madrid.

"Examinations performed today (ultrasound and CT) confirmed an anterior external sprain of the right ankle but also the associated existence of a fissure of the fifth metatarsal," PSG said.

This won't be a welcome sight for Paris Saint-Germain or Brazil fans...Neymar shares an image of his injured ankle on Instagram.February 26, 2018

Neymar appeared to be targeted by Marseille throughout Sunday's Classique meeting, the Brazilian fouled on eight occasions, although he set up Edinson Cavani for PSG's third goal.

The world's most expensive player - linked with Madrid ever since joining PSG from Barcelona in a €222million deal in August - had been a doubt to face Marseille due to a virus.

But after being passed fit Neymar sustained an injury that is likely to stop him from playing against PSG, with the Brazilian having only eight days to recover.

Speaking to reporters after the game, Sarr denied intending to hurt Neymar.

"Neymar? Me, I saw only one thing is that I played the ball," Sarr said.

"I didn't go at all with the intention of doing it. This is not my type of game at all. Apparently he twisted his ankle. It's unfortunate for him, but it's a game fact like any other."

Neymar posted an injury update to his Instagram story early on Monday, displaying his heavily strapped ankle to his 90 million followers.

In addition to Neymar's injury, PSG confirmed centre-back Marquinhos was also injured against Marseille, the defender sustaining a thigh injury.

With both players expected to miss the second leg of the Madrid tie, PSG's chances of overturning a 3-1 deficit at the Parc des Princes have received a damaging blow.

Adrien Rabiot put the Ligue 1 leaders in front at the Santiago Bernabeu only for a Cristiano Ronaldo brace and a late Marcelo strike to put the Champions League titleholders in firm control.