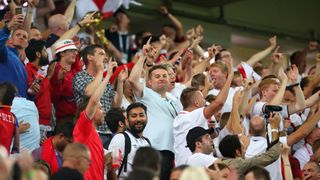 The impending arrival of thousands of England fans in Samara for Saturday's World Cup quarter-final against Sweden is not a cause for concern, says the region's head of tourism Mikhail Maltsev.

Tuesday's penalty shoot-out win over Colombia booked the Three Lions' place in the last eight and a meeting with Janne Andersson's men, who overcame Switzerland 1-0 earlier that day.

In recent years, a section of England's fanbase has earned a less than glowing reputation for its behaviour abroad, while clashes during Euro 2016 with Russian hooligans - who have been conspicuous by their absence here - were well documented.

England supporters have travelled in smaller numbers to these finals, though, and there have been no reports of trouble at any of their matches in Volgograd, Nizhny Novgorod, Kaliningrad and Moscow.

Progress to the quarter-finals has prompted suggestions there could be a greater presence in Samara to follow Gareth Southgate's side, but Maltsev insists the city is not anticipating any unseemly incidents.

Also spent time with Samara’s head of tourism, who said the impending arrival of fans was not a concern and that there was no reason to increase security measures.Story to come for 4 July 2018

"I don't think we have to worry about that at all," he told Omnisport.

"We've created very safe, comfortable conditions in Samara. Our city is beautiful, our people are friendly and hospitable and I'm sure that England fans will love it here.

"So being in these comfortable, likeable conditions, they won't have any reasons to be aggressive or judgemental about anything. They will love the holiday and ongoing festival that we've created here."

And Maltsev says there is absolutely no reason to increase security measures in Samara, which, as across all host cities, has operated seamlessly in the opening weeks of the tournament.

"During the entire World Cup we've had the highest level of security and safety measures set all around the city," he said.

"There won't be any extra safety measures taken, since we can see that the ones we already have are working perfectly. The lack of any incidents during the matches is the best proof of that."