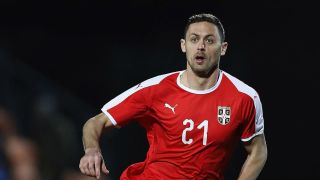 Serbia midfielder Nemanja Matic believes the pressure is off his side as they get ready to start their World Cup campaign against Costa Rica on Sunday.

Alongside the Central American outfit, Serbia have been drawn against Brazil and Switzerland in a daunting Group E.

Matic, however, believes just qualifying for a first major tournament since the 2010 World Cup has lifted some of the weight of expectation ahead of their Russia 2018 campaign.

"We had a lot of pressure before this qualification, as we didn't go to Brazil [for the 2014 World Cup] or the last European Championships," he told Manchester United's official website.

"So, there was a lot of pressure on us and it was very important for us to go there directly. We did it and I was very happy.

"It was emotional for me and my team-mates and I'm happy we will represent our country in Russia. It's very nice for our people."

Matic - competing in his first World Cup - refused to be drawn on his side's chances of progressing to the knock-out stages, but insists they are going into the tournament in a positive frame of mind.

"I think we will have our chance but we have to do our best, prepare very well and we will see," he added. "It is difficult to say [what our chances of progression are].

"Of course, we are working very hard on everything, but there will be a lot of great quality in the tournament. But we are positive. There is a long way to go but I am always positive."