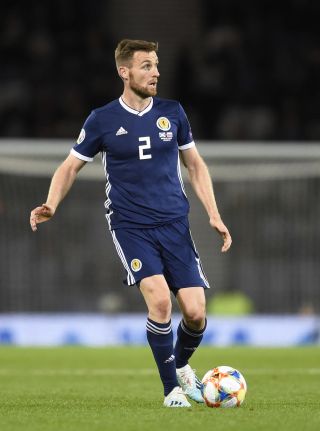 Kilmarnock defender Stephen O’Donnell is set to hold off on a decision on his future until the end of the season.

The Scotland international is out of contract at the end of the campaign and has been offered a new deal by Kilmarnock, who face Motherwell on Wednesday night in the Ladbrokes Premiership.

But O’Donnell is prepared to let his contract run down before deciding whether to extend his stay or move on.

When asked about his contract situation, O’Donnell said: “There’s been no progress. Just now I am trying my best for Kilmarnock and I’ll just keep working away.

“There are things going on off the pitch as my wife is pregnant just now and I’m just keeping focused on that, along with the football.

“Come the end of the season will be when I’ll decide probably what I’ll do. I’m fortunate enough that Kilmarnock have offered me a contract but just now I’m not quite sure what I’m going to do.

“Just now I’m happy with my situation, I won’t be the first or last person to be coming into the last six months of my contract. I’ve enjoyed my time at Kilmarnock and I’ll keep trying to play my best for Kilmarnock.”

O’Donnell’s situation may tempt Killie to cash in on the right-back in January but that is not a scenario the 27-year-old is thinking about.

He said: “Look, no-one came in for me in the summer, so I don’t see why it will be any different and someone comes in for me in January.

“If it does happen then there is a different question to be asked and we’ll need to look at it.

Kilmarnock climbed into third place following their win over St Mirren and face the side immediately below them at Fir Park.

Killie finished third last season but O’Donnell insists it is too early to talk about repeating that feat.

He said: “It’ll be very difficult but maybe if we’re in this position in three or four months time hopefully we can have a similar conversation and I can say it’s within our grasp.

“It’s very similar to last season, we have to make sure we are safe from relegation, then we aim for top six and then we aim in the remaining games to see where we can do.

“We need to keep working hard and maintain the things that get us results.

“It’s early in the season and if you’d have asked me if we’d have been third after the Connah’s Quay game then I’d have said that would be extremely difficult.

“But we’ve come together well and performed well enough to get wins and points on the board. Hopefully we can continue that.”