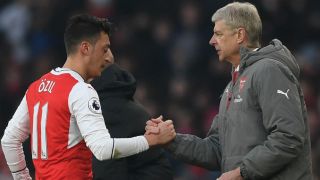 Arsene Wenger concedes Mesut Ozil may be struggling to handle the criticism that has come his way in light of Arsenal's poor form.

The Germany international's displays have come under scrutiny of late and the spotlight intensified following a lacklustre showing in last Sunday's 2-0 loss to bitter rivals Tottenham, after which his body language was questioned.

With Arsenal residing sixth in the Premier League and facing an uphill battle to secure Champions League qualification, Ozil has received little sympathy from the Gunners faithful and, though Wenger defended the 28-year-old, the Frenchman admitted the flack may have got to him.

Asked if the former Real Madrid star was an easy target, Wenger – whose side host Manchester United on Sunday – said: "Big players have to carry the responsibility of the team. People look at him like that.

"I believe that last Sunday just to criticise Mesut Ozil's performance does not reflect exactly what happened on the pitch.

"Overall I believe that recently he has put a lot of effort in. He was a bit like the rest of the team, not physically at his best.

"I think we gave a lot on the previous Sunday, the Wednesday and we had not completely recovered on Sunday. He was one of them.

"It's always been like that. The big players get more criticised and his style is a bit more fluid, less aggressive, but that doesn't mean he wants it less than others."

It was revealed that Ozil, who has another season to run on his deal, had kicked a door at White Hart Lane to unleash some frustration after being required to undergo a drugs test following the defeat to Spurs.

Wenger apologised for that outburst and offered a guarded update on Ozil's contract situation, citing a desire to retain the services of Alexis Sanchez and Alex Oxlade-Chamberlain.

The 67-year-old added: "Before we spend big money we analyse all the aspects of commitments because it's not only Mesut Ozil and Sanchez we have to extend, we have others to extend.

"We have to make sure we have the resources available to extend the other players who we need to be successful. For example Chamberlain is part of it."